Let’s look at the alternative to sanctification: what if we are “only justified”?  Aren’t we still saved?

Paul – one of the authors inspired by God’s Spirit to write some of the New Testament in the Bible – Paul described this as the saddest, most lamentable, and even most dangerous form of salvation.  He said this kind of “justified-only” salvation is “like a person who has been snatched from a burning house” (1 Corinthians 3:15).

Imagine a person whom has been rescued from a burning building: the backs of their clothes have burned off; the skin on their backs has been singed by the flames of eternal destruction.  How close was that person to hell by being “only justified”?  And hey, if this sounds like strong language – it is.  But it’s language from God’s Word – and He said it because He loves us.

When my toddler reached to touch a hot stove, I would swat his hand away – why?  To abuse him?  To punish him?  No – I love him, and I don’t want him to burn.  Sometimes Jesus used strong language, not out of harshness or abuse, but out of love – a love desperate to see humanity snatched from the jaws of death and the destruction that comes when we just give our lives away to our enslavement to sin.

But what if I sin, after I’ve been justified?  Have I fallen from grace with God?  Do I need to somehow re-earn God’s love?  Do I need “get saved” again?

If we confess our sins, He is faithful and just to forgive us our sins and to cleanse us from all unrighteousness.  –1 John 1:9 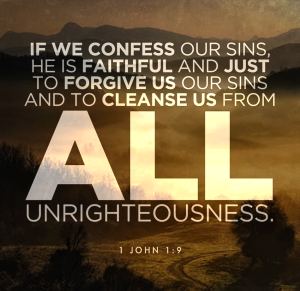 Do you hear that critical “and” in 1 John 1:9?  Jesus does not just want to forgive us from our sin, He also wants to “cleanse us from all unrighteousness”.  We need both His forgiving grace AND His cleansing work in our lives in order to be whole.

One famous theologian said, “Christ did not come to save us in our sin, but from our sin, and to bring us to heaven with holiness.” (John Wesley)

Are you “just saved”?  Are you “only justified”, but you have done little in the way of letting God sanctify you?  Have you received His forgiveness, but ignored or rejected His cleansing work within?  If so, you are standing dangerously close to the fire that destroys, and you may just barely be like one who is “snatched from a burning house”.

Run away from that burning house!  Flee from the destruction that you are not caught up in it yourself!  Rush into the waiting grace and work of Christ in you and for you.  Be not forgiven of sin only; be cleansed from it by Christ.  Be wholly sanctified, entirely transformed for His glory, and for your own best.

May God Himself, the God of peace, sanctify you through and through.  May your whole spirit, soul, and body be kept blameless at the coming of our Lord Jesus Christ.  The One who calls you is faithful, and He will do it.  –1 Thessalonians 5:23-24

One thought on “What of those who “get saved”, but do nothing else?”