Have you ever wondered why God sent Jesus to the place and time that He did?  Why Galilee in the 1st century?  Why a tiny, powerless territory on the fringes of the Roman Empire?  Why during the reign of Caesar Augustus, when King Herod was governor of Palestine?

Why not during the mid-twentieth century, when an evil tyrant was systematically exterminating God’s ancient, chosen people?

Or why not now?  World travel is faster, easier, and cheaper than it has ever been.  Global communication is easy, instantaneous, and widespread…

Have you ever considered why Jesus chose the disciples He did?  Fishermen.  Tax collectors.  Nobodies.  Unheard-ofs.  These were not people of influence, with tons of connections.  Why not rich people, political leaders, celebrities, popular athletes and performers – people who could have spread the Gospel message to a much wider audience much faster and with much more popular appeal through name recognition?

God sent His Son at just the time He had selected, to just the place He wanted.  And Jesus hand-picked precisely who He wanted to send into Jerusalem, Judea and Samaria, and to the ends of the earth.

It was not just the job that Jesus came to do that was significant.  It was also who He was; what He brought with Him to those specific individuals who interacted with Him, learned from Him, felt His touch, heard His voice, saw His face, shared meals with Him. 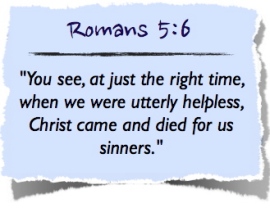 He did not just come as Savior, He also came as a Person, to be Himself, and to bring His unique personality to a Community of people in Galilee in the 1st century.  This is significant, and we have to remember it was not random or arbitrary.  God very intentionally chose the specific place and time that He wanted His Son to be incarnate in the world.

Dear reader, I would ask you to consider the providence of your own placement at this particular time in history, in the specific place / job / location where you are right now…  By way of example, I offer my current colleagues as a demonstration, to get your own mind pondering God’s sovereign placement of where (and when) you are right now.

I work aboard a civilian hospital ship that serves the poor along the west coast of Africa, and I was curious as to just how many people around the world are qualified to do what we do, in comparison to how many are here doing the work.  Here’s what I found out:

You may think you decided to move, serve, or be where you are right now, and you’re at least partially right.  But from before the foundations of the earth, God had in mind to send you to your particular location at this exact time.  You are chosen.  You have been hand-picked by the Almighty.  For a particular place, at this specific time.  Out of all the others who are qualified to do what you do, you were especially chosen.  And sent.

I personally experienced a significant spiritual attack on my thoughts and emotions not long after my family had sold everything, left our dream life back home, and moved overseas to join God’s work in Africa full-time. “What am I doing here? Who do I think I am? I’m a fool to think I could serve God here…” In the next post, I will share more about this spiritual attack, and begin to introduce the avenue that God gave to help me escape from such moments of malicious, downward-spiraling, and deceptive thinking.

2 thoughts on “God’s Sovereign Placement of You, Right Where You Are, Right Now”