In Hebrew, the Day of Atonement is known as Yom Kippur.  It falls every year in mid-October, and it is for many Jews the most sacred day of the year.

Click here to read part one of this two-part series on The Day of Atonement.

Now, the slaughter of a first goat and the banishment of the second scapegoat have not been culturally permissible practices for hundreds of years, so many Jews around the world have adopted a different tradition at Rosh Hashanah, the Jewish New Year celebration which falls just 2-3 weeks after Yom Kippur each year.

I learned about this in college from a Messianic Jewish classmate (a person who is Jewish in religious upbringing and culture, but has also chosen to accept Jesus as Messiah and Lord).  I found the symbolism of this to be so rich and meaningful and deeply touching to me as a follower of Christ who has been saved and atoned for by Jesus’ ultimate sacrifice on my behalf.

The tradition is this: you take a loaf of bread (or a roll, or a bun, or whatever bread-like substance you can get your hands on) down to the local river.  It needs to be a river or stream, not a lake or pond.  The water needs to be moving, flowing.  As you stand beside this river or stream, you begin to call to mind all your sins from the past year.

As you do so, you break off a piece of the bread in your hands.  If you have already confessed that sin to Jesus, thank Him for the atonement He has made for you for that sin, then toss the bread into the water, and watch it as it begins to float away from you.

If you think of a sin that you have not yet confessed and repented from, do so now.  Give that sin to Jesus, spiritually and really, and then symbolically let go of that sin.  Send it away on the scapegoat, or in this case, the scapebread.  Release each sin as a piece of bread dropped into the water.

Watch each one as it floats away from you.  It will get smaller and smaller, harder and harder to see.  Eventually, it will disappear altogether.

Nothing magical is happening here.  This is just an act of symbolism.  The bread doesn’t mysteriously assume the reality of your sin somehow; it is just a representative, like the scapegoat in Leviticus 16.  The goat does not literally take the sin away, nor does the bread or the current of water.  No, Jesus takes the sin away.

We definitely do, though, bear the responsibility of sending it away, of driving it away from our presence, from our lives.

This exercise by the river is a beautiful way to demonstrate what you are asking God to help you do in your own heart and life – what you are trusting Him to do for you.  As you release your sins to Him in faith, you entrust to Him (and thank Him for) the role He plays as Atoner – as Deliverer and Redeemer.

We wage a war against sin, and the battles will rage on for the rest of our lives.  But at Yom Kippur (and year-round, really, for followers of Christ) we can remember the end of the story: because of Jesus and His faithfulness to us, WE WIN.  He makes us into Victorious Champions over our sin.

Sin is both killed on the altar of the cross before God, and it is also driven away from our lives, never to plague us again.

The Day of Atonement foreshadows the perfect and permanent offering that would be made by the Great High Priest, Jesus Christ, on behalf of the people.

His offering – His sacrifice – would be far superior to that of Aaron.  The Day of Atonement sacrifice only lasted one year – and that was only if you managed not to commit any intentional or accidental sins in the entire next year!  Like the rest of the Levitical sacrificial system, the Day of Atonement only secured your cleanness before God until the next time you sinned or became unclean.

Our role is to accept His atoning work on our behalf and to participate in the death and banishment of sin by entrusting it to Jesus’ sacrifice for us on the cross and by driving it away from ourselves, just like the scapegoat in Leviticus 16.

If you have not accepted the work that Jesus has done for you on the cross, you can do so right now by faith.  His sacrifice was ultimate, complete, and sufficient to deal with all the sins of mankind.  Believe in your heart that Christ died for you, and that God raised Him from the dead, and receive the free gift of atonement! – right standing with God – that Jesus bought for you with His own life.

The next step is to tell someone.  Tell someone you love and trust that you have entrusted your life and your status before God to Jesus.

For all of us, we bear the responsibility to drive away our sins and banish them from our lives, like the scapegoat in Leviticus 16.  What sins are still lingering around in your life from the past week or month or year?  Banish them!  Drive them away! 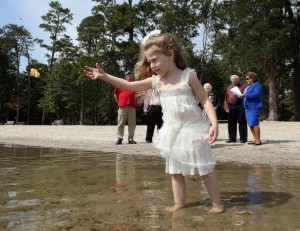 Do something symbolic this week to demonstrate your driving away of your sins, and of the ultimate victory that Jesus has secured for you over those sins:

DO something active that will symbolize what Christ has done for you.  Yes, it will just be a symbol; Christ does the real work of actually taking our sins away.  But the symbol is both meaningful and powerful as an act of faith in Jesus.

That is why God instructed the people to associate their atonement with the banishment of the scapegoat.

Click here to read part one of this two-part series on The Day of Atonement.