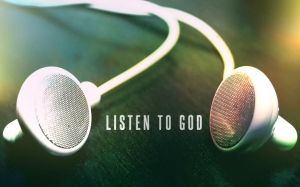 I like to listen.  I would even go so far as to label myself as a “good listener.”  Sometimes my favorite kind of people to be around are the ones who can just talk and talk and talk (of course, if I actually have something I want to say, those situations can be most frustrating!) – but it’s for a completely selfish reason that I like to be around talkers – it’s just nice sometimes to not have to “carry the conversation.” (I especially like it when the talker has interesting / in depth / transparent / real / meaningful things to say!).

For as much as I like to listen (and have liked to listen for as long as I can remember!), it’s only been in the past few years that I’ve begun learning to listen to God.  Yes, I’ve been following the Lord for a while… and yes, I feel like there have been many times through the years when I “heard” Him – but the kind of listening I’m talking about has become a daily practice – not just a once-in-a-while occurrence… it’s something that’s become normal in my relationship with God (well, as “normal” as getting a special word from the God of the Universe can be!).

Sometimes when one hears the phrase “listening to God” there are immediate red flags and question marks and confusion that arise.  Sometimes there are flat out statements like “God doesn’t talk to me” or “I just can’t hear God’s voice.”

But how can we hear what He’s saying if we don’t know His voice or if we never take the time to be quiet and still?

Like any new activity or skill, it takes practice to learn to listen to God.  There are things I want in life – I want to know how to sew… I want to be able to do a flip on a trampoline… but if I’m unwilling to learn those skills, take the time to practice them, and have the discipline required for that particular desire, they aren’t “just going to happen.”

It’s highly unlikely that I will ever be able to sit down at a sewing machine and magically know how to sew.  However, if I spent a few hours with my good friend Carey, or if I got a how-to book (and read it / followed it), or if I watched my friend Nicole for a while, I just may end up learning how to sew (flipping on a trampoline would require practice… and quite a bit of courage…).

Give it a try!  And don’t give up if you don’t “hear” anything in the first attempt.

In time, though, the silence will be broken – in a good way – as you begin to recognize the silent communication in your heart that is but only a faint shadow of a whisper.  Inaudible words, but a message, nonetheless.  This is the voice of the Good Shepherd.  As His sheep, you are learning His voice.  Before long, this daily time of stillness and listening will become some of the most important and meaningful and real, as your faith in our communicating God grows and deepens.