My good buddy and fellow young dad, Brandon Jones sent me the following question, and it’s a great one!  It spurned on quite a long response from Dianna and myself.  I asked Brandon’s permission to share our conversation here on LikeTreesPlanted, and he happily agreed.

This will be a two-part post, just sharing what Dianna and I have chosen to do with the question of “What do you ‘do’ with Santa at Christmastime, as Christian parents?”  You can link to part two by clicking here: How do you help others understand what you do with your kids regarding Santa at Christmas?

Kat and I wanted to hear how the Cash family handles Christmas and Santa. Mckinley is finally old enough that we have to officially decide if we are going to do Santa or not. We are torn, because we both grew up believing in Santa and have fond memories of it, but we just aren’t sure how wise it is to do with our kids. We don’t necessarily have an issue with it being too secular or anything, we just really hate the idea of taking so much of the focus off of Christ. We are wondering if there is a way to do Santa, but balance it in a way that keeps focus on Jesus. Any thoughts?

Santa! Yes – that’s a great question. We don’t “do Santa” with our kids. But we don’t make a big deal out of NOT doing it either. 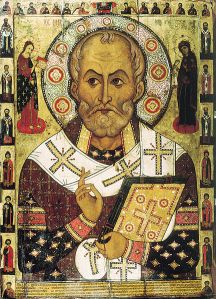 We’ve taught them who the real St. Nicholas is/was – a servant of God who secretly served the poor by delivering anonymous gifts to them (often at night). He is a symbol of generosity and charity – therefore, a beautiful emblem for Christmas. The example of Saint Nick is not one to be thrown out; we should celebrate him as we do any classic saint who has contributed much to the Kingdom of God!

So we don’t ignore, downplay, or even dispute the existence of “Santa Claus” with our kids. But we treat him for who he was: an historical figure, and a real person, who lived out his faith in a beautifully generous way in celebration of Jesus. Our role at Christmas (and year-round) should be the same.

So, we don’t deny the role of Santa in Christmas, we just shift the focus from him to the real star of Christmas: Jesus! We’ve also taught our kids not to make a big deal out of believing or not believing in Santa, but a big deal out of Jesus’ birthday! We refer to December 25th as “Jesus’ birthday” around them as as often as we call it “Christmas”.

Early on, we feared the reaction that people might have when they ask our kids: “So! What’s Santa bringing you for Christmas this year?!” But it just hasn’t ever been weird or awkward like we thought it might be. They would usually just bypass the Santa part and answer the question, like: “I’m getting a _____ for Christmas!” or “I hope I get ____!”

We also make a big deal (with our kids, not with others) out of what we are giving to Jesus for His birthday. We’ll plan it together… talk about what we want to give to Him as a family… what Kingdom works we’d like to support together as a family in honor of Jesus’ birthday… It’s pretty fun what small children will come up with when you ask them straight up what your family should give to God’s Kingdom in honor of Jesus’ birthday!

So… all that rambling is to say that we don’t so much try to deny or ignore the “getting” and the “Santa” portions of Christmas, so much as we just spend WAY more time talking about the “giving” and the “Jesus” parts of Christmas. Does that make sense?

8 thoughts on “What do you “do” with Santa at Christmas, as a Christian parent?”